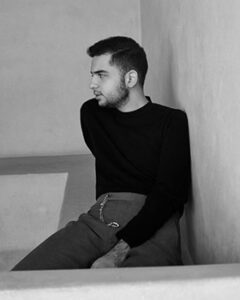 Zeid Hijazi grew up in Jordan, and he credits his art teacher in Amman with having given him the right foundation to eventually purse a degree in fashion from London’s Central Saint Martins. The years spent in London and Jordan have had a major influence on his work, which usually references his past experiences and his most personal stories, while juxtaposing them with inspiration from Lam Qua, Francis Bacon and 1950s Christian Dior. “The fact that I can change how you are represented through the medium of clothes is what makes me want to build my own world,” he says.