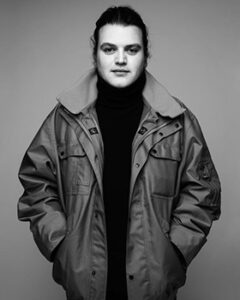 Roni Helou was born in Lebanon in 1992. He attended Creative Space Beirut, a progressive fashion design institution offering free education. Upon graduating, he took part in Starch Foundation for two seasons, and through Starch his collections were presented at Fashion Forward Dubai.

Roni was awarded the Boghossian Foundation Fashion Prize for 2017, which offers a residency at Villa Empain in Brussels. Pieces from Roni's previous collections were displayed at Les Nouveux Créateurs in Paris as part of Exposition Mode Emergente du Monde Arabe, co-curated by Institut du Monde Arabe and Fashion Forward Dubai.

The brand Roni Helou has been featured in prominent regional media outlets such as Vogue Arabia, Harper’s Bazaar Arabia and UAE's The National. His designs are sold at various boutiques in the region.