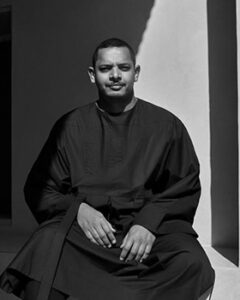 Omer Asim is a Sudanese designer living and working in London. He graduated from the Bartlett School of Architecture before completing a postgraduate at the London School of Economics and Political Science. After a short stay with the United Nations Development Program, he started training as a psychoanalyst. During his psychoanalytic training he became fascinated with clothing and appearance, in relation to mind and body.

Omer learned his craft through a number of internships, starting with Maurice Sedwell of Savile Row and ending at Vivienne Westwood. Before freelancing in the industry, he attended Central Saint Martins, specializing in creative pattern cutting. He launched his label in 2011.

His design process does not rely on sketching or theme inspirations. The focus is on substance and craft to un-design a solid silent aesthetic. Modern shapes, cuts and textures mix with primitive elements to create a sense of regressive future.