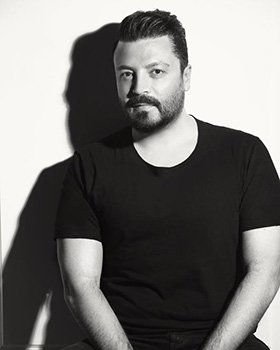 Zuhair Murad grew up in Baalbek, Lebanon. Since his childhood, he always dreamed of escaping to a world of fantasy. He started sketching dresses at the age of 10 and has often said he couldn't recall a day in his life without a pen in hand. In 1997, Zuhair Murad opened his first atelier in Beirut, catering to a growing private clientele, and presented his couture collection for the first time during Haute Couture Week in Paris in 2001, gaining momentum with international media. To meet growing and expanding demand, he then launched his first ready-to-wear evening collection (Rendez-Vous), a simpler yet still aesthetic, glamorous and contemporary line. In 2006, Zuhair Murad opened his first boutique in the heritage Melrose Building located in Downtown Beirut, and in 2007 he inaugurated his Parisian Maison de Couture in the heart of the Triangle d’Or at 1-1bis Francois 1er street, the design studio and workshop where he created his ready-to-wear collections, and couture and bridal dresses. His first ready-to-wear bridal collection launched in 2011, and in 2012, the supervisory board of the French Federation de la Haute Couture et de la Mode elected him as guest member to the Haute Couture official calendar.

In the past decade, Zuhair Murad has expanded to several notable locations, with design studios and a bridal boutique in Beirut, showrooms in Paris, a store-within-a-store in London, Kuwait and Istanbul, a company in Switzerland and at boutique in UAE. His extensive lines encompass haute couture, ready-to-wear and accessories.