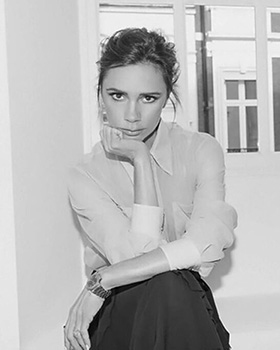 Victoria Beckham started studying ballet at a young age, moving on to pursue her interest in dance at the Laine Theatre Arts college in the United Kingdom. She went on to achieve global stardom with the Spice Girls.

Victoria is now a global businesswoman and Creative Director of the Victoria Beckham brand – launched in 2008 and awarded the prestigious Designer Brand of the Year accolade at the British Fashion Awards in both 2011 and 2014. The brand showcases only the finest craftsmanship, fabrication and materials, with all four Victoria Beckham lines developed at Victoria’s studio in London. As the Victoria Beckham collections become ever more progressive, so this passion for innovation extends to the brand’s communications and creative projects.

The year 2013 saw the launch of victoriabeckham.com, a website offering both e-commerce and interactive content curated to provide a more intimate view of Victoria’s design approach and working processes. In 2014 Victoria Beckham opened its first store at 36 Dover Street in London – a collaboration with architect Farshid Moussavi to transform a neglected Mayfair townhouse into a shopping destination echoing the dynamism and modernity at the heart of the brand. In March 2016 Victoria opened her second retail site at the Landmark Hong Kong.

In 2014 Victoria was appointed International Goodwill Ambassador for UNAIDS. In this role Victoria is collaborating with UNAIDS to raise awareness around HIV. She has undertaken several global field missions – from China to Africa raising awareness on HIV-related stigma and discrimination.

In April 2017, Victoria was awarded an OBE for her services to the fashion industry.