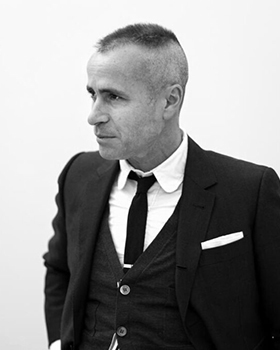 In 2001, Thom began his business with five suits in a small “by appointment” shop in New York City’s West Village and, in the years following, expanded his business to include complete ready-to-wear and accessories collections for both men (2003) and women (2011). Thom has also become known for his highly conceptual runway presentations, which have gained global attention for their thought-provoking and dramatic themes and settings.

Thom has been honored with the CFDA Menswear Designer of the Year Award (2006, 2013, 2016), the GQ Designer of the Year Award (2008), the FIT Couture Council Award (2017) as well as the Cooper Hewitt National Design Award (2012). His designs are recognized by museums around the world, including the Costume Institute at the Metropolitan Museum of Art, the Museum of Modern Art, the Victoria & Albert Museum, the Costume Museum at Bath and the ModeMuseum Antwerpen.