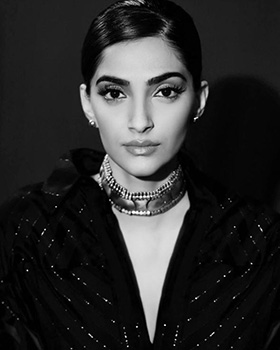 Sonam Kapoor Ahuja is an Indian actress and the daughter of Bollywood star and global icon Anil Kapoor.

Sonam started her career as an assistant director to the legendary Sanjay Leela Bhansali on the award-winning film Black. During her time on set she was cast in her first film Saawariya. Her path to stardom ascended rapidly with leading roles in Raanjhanaa and Bhaag Milkha Bhaag, which earned her numerous best actress nominations.

In a welcome departure from her previous roles and one that would be one of the most commercially successful films with a woman as a protagonist, Sonam went on to win a National Award for her film Neerja in 2016.

With a versatile choice in films, Sonam emerged as the most profitable female actor, proving her to be one of the most bankable stars of the industry. In 2019, Sonam appeared in Bollywood’s first LGBT love story.

Sonam was named by the Huffington Post as one of the 100 Most Influential Women on Twitter. Her reach on social media includes over 17 million followers on Instagram.

Sonam is also a fashion icon with global influence. She regularly graces the covers of international fashion magazines. A flag bearer of Indian fashion on international Red Carpets, she shows off a bold style and experimental fashion choices that have made her a favorite among fashion designers. She is also a long-standing ambassador for cosmetics brand L’Oreal.

In 2017, Sonam and her sister Rhea Kapoor launched high street fashion brand Rheson. The pop culture-inspired label was instantly successful and is available online and in multi-brand stores.