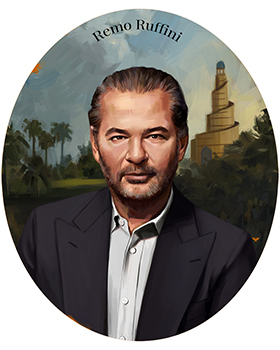 Remo Ruffini is the Chairman and Chief Executive Officer of Moncler S.p.A. He lives with his family between Milan and Como, his town of origin, where he was born in 1961. He enjoys the sea and sailing in summer, and skiing and the mountains in winter. In 2003 Ruffini took over the helm of Moncler, the legendary Franco-Italian brand that specializes in producing down feather products, undertaking an international re-launch on a grand scale. It proved to be an outstanding reinvention of a brand which, thanks to the far-sighted and creative vision of Ruffini, was floated on the Milan stock exchange just one decade later, in 2013.

Remo Ruffini’s career got underway between Italy and the United States, where he joined his father’s company, Gianfranco Ruffini ltd. On returning to Italy in 1984, he founded New England at a very young age. The company specialized in men’s shirts, and soon expanded its products to include a complete range of
sportswear, followed by the women’s collection in 1993.

From 2003 onward, Remo Ruffini dedicated his energies wholly to Moncler. With his love of challenges and a talent for overall vision, Ruffini left his mark on the brand with an integrated strategy that combined entrepreneurial, market-related aspects with a multifaceted creative sensitivity.

His insight focused on the concept of the “global puffer jacket,” which was versatile and perfect for any occasion. It was a revolutionary approach that marked the international success of Moncler. The puffer jacket went from mountain-wear to a more metropolitan approach, without neglecting the original heritage for which it was so famous. The urban attitude of living harmoniously alongside a keenly felt technical and sporting vocation was translated in 2010 into a specific collection named Moncler Grenoble. A whole range of talented designers applied their creativity to identifying new and different interpretations of the puffer theme.

With Moncler Gamme Rouge, launched in 2006 and today designed by Giambattista Valli, the Haute Couture puffer jacket took shape, while Thom Browne, who has worked with Moncler Gamme Bleu since 2009, explored the options for tackling the rules of men’s tailoring while interweaving them with the brand’s sporting roots.

From 2004, focusing on experimentalism and the languages used by the new generations, Remo Ruffini led Moncler to work alongside many international designers, from Balenciaga to Junya Watanabe, Chitose Abe for Sacai, Mary Katrantzou and Alexandre Mattiussi for Ami.

In 2017, Remo Ruffini was named Entrepreneur of the Year 2017 for Italy at the XXI Edition of the EY award event held in Milan. The prestigious prize identifies and recognizes the achievements of outstanding entrepreneurs. And in June 2018, Remo Ruffini has been named Cavaliere del Lavoro (Knight of Labour) in Italy. The Cavaliere del Lavoro title recognizes Italian entrepreneurs who have distinguished themselves in different sectors of the economy and is of the highest honors bestowed by the President of the Italian Republic.