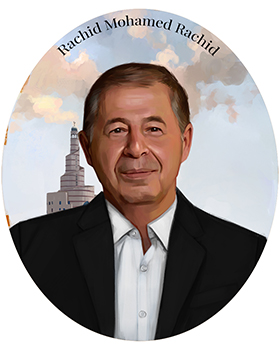 Rachid Mohamed Rachid is one of the most prominent entrepreneurs in the Middle East and the former Minister of Trade, Industry and Investment to Egypt, who continues to make his mark around the world.

Rachid is the Founder of the Swiss based Alsara Investment Group, which invests in companies in creative industries in the United States, Europe and the Middle East, with a focus on design, innovation and technology. Rachid is also the CEO of Mayhoola for Investment, which invests in high-end brands, and is the Chairman of Valentino and the Chairman of Balmain; two of the leading luxury fashion companies in the world. He is also a board member of the Katara Hospitality Group and the co-Chairman of the Virginia Commonwealth University Advisory Committee. Notably, Rachid was awarded the Cavaliere di Gran Crose, Ordine al Merito della Repubblica Italiana, the highest order of merit in Italy.

His latest venture, the BIDAYAT Investment Group, aims to invest in local companies in the Mediterranean by providing education and an encouraging ecosystem that allows creatives to develop their products and compete internationally.