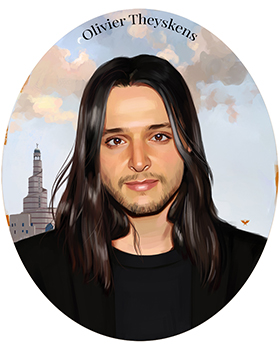 Olivier Theyskens was born in 1977 of a Belgian father and a French mother. As a child, gifted for drawing and having a sense for detail, his interest for couture appeared: aged 7 he declared that he wanted to “become a couturier”.

In October 1994 at the age of 17 he entered the Ecole Nationale Supérieure des Arts Visuels de La Cambre to study fashion design in Brussels. He left the school in 1997 to start his own brand.

The same year Theyskens presented his first collection of feminine, high fashion ready-to-wear in Belgium. He then decided to show his following collection in Paris during fashion week and rapidly found international coverage. VogueRunway characterized his work at this time as consisting of “strong, dark collections that electrified fashion in the late nineties.”

In 2002 Theyskens moved to Paris when he was appointed Artistic Director of Rochas, a position he held for four years. For his work at Rochas he was awarded the Star Award from Fashion Group International in 2005 and the title of Best International Designer by the CFDA in 2006. That same year Theyskens took over the position of Artistic Director at Nina Ricci where he infused the house with what WWD described as “his strong suit – stunning evening dresses that are soft and fluid.”

Theyskens’ unique aesthetic was captured in a book project, ‘The Other Side of the Picture’ (Assouline). Published in 2009, the book is an anthology of images that offer an intimate insight into Theyskens’ work throughout the years.

In 2010, after moving to New York, Theyskens and Theory joined their complementary strengths and visionary approaches to contemporary fashion to create Theyskens’ Theory. In November of that year, Theyskens was appointed Artistic Director of the global Theory brand where he stayed until 2014.

Having always the ambition to pursue the development of his own House, Theyskens decides to return to Paris to re-launch his eponymous label in 2016.

Olivier Theyskens is one of the youngest designers to be celebrated by two retrospectives.

In October 2017, the prestigious MOMU Fashion Museum in Antwerp unveiled a six-month exhibition of Olivier Theyskens’ work covering 20 years of career, with the publication of a monograph entitled ‘She Walks in Beauty’ (Rizzoli).

In June 2019, the Cité de la Dentelle et de la Mode in Calais , opened ‘In Praesentia’, an exhibition focused on Olivier Theyskens’ singular approach to fashion accompanied with the release of a comprehensive catalogue (Lienart).

In February 2020, Theyskens was named Artistic Director of Azzaro, overseeing all the lines of the house, a position he holds in parallel to developing his namesake brand.

Throughout his career Olivier Theyskens also worked in the art field, creating costumes for the Chicago based rock band The Smashing Pumpkins, for the Théatre de la Monnaie in Brussels and for the New York City Ballet, as well as creating dresses for major celebrities and prominent socialites.