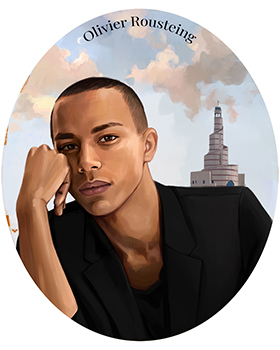 When Olivier Rousteing, then 25, was selected to head Balmain’s design team in 2011, he became one of the youngest talents ever named to lead a historic Parisian fashion house. Olivier is very conscious of his unique background and position. “I’m not the typical creative director of a major house,” he says. “I see first-hand how my generation lives and I understand how they want to dress. Most importantly, I’m a privileged witness to the openness, optimism, universality and honesty of this dynamic moment, with so many rapid evolutions in art, communication, popular culture and music. Those changes constantly inspire me and are reflected in my collections – they allow me not only to design clothes, but perhaps also to shake things up a little and offer a new vision to fashion.”

Olivier was raised in Bordeaux and studied fashion at Paris École Supérieure des Arts et Techniques de la Mode (ESMOD). At 18, he moved to Italy, where he worked at Roberto Cavalli for five years, beginning as an intern and rising swiftly and steadily through the ranks to be named designer for the men’s and women’s ready-to-wear collections. When the opportunity arose for him to return to Paris to work at Balmain, Olivier seized it, forming a part of the house’s design team for two years before being named head of design in 2011.

As creative director, Olivier has successfully grafted an immediately recognizable style upon the historic Parisian house. While relying on Balmain’s rich archives for inspiration and fully utilizing the atelier’s impressive mastery of intricate, traditional couture techniques, he has also managed to impose a singular silhouette and contemporary outlook that reflect the way that members of the Balmain Army – the young men and women of the designer’s own gener-ation—live their lives. Season after season, runways highlight both the exciting, inclusive diversity of the modern Balmain universe and the importance of 21st-century culture – in particular, today’s music – in that universe. The brand’s transformation has excited many, including a host of retailers – from H&M to Nike – eager to bring the innovations and spirit of Olivier’s Paris runways to main streets across the globe. In addition, his creative leadership has been a key reason for Balmain’s rapid growth in recent years, with the company opening a host of new boutiques in the world’s fashion capitals and launching new men’s, children’s, accessory and eyewear collections.