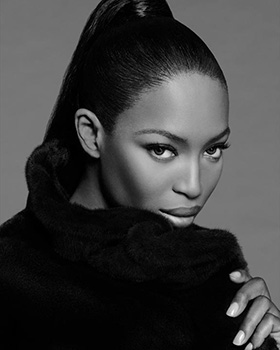 One of the five original supermodels, Naomi Campbell is without doubt one of the most prolific and influential profiles of contemporary culture today. She was born in London and caught her break as a fashion model when she was just 15. Throughout her illustrious career, she has fronted the covers of more than 1000 magazines and has been featured in advertising campaigns for celebrated luxury houses including Burberry, Prada, Dolce & Gabbana, Marc Jacobs, Louis Vuitton, Yves Saint Laurent and Valentino. Her instantly iconic runway walk showcasing the collections of Chanel, Azzedine Alaia, Christian Dior and Versace has made her a global sensation.

As a barrier-breaking leader, Naomi has championed the industry, receiving numerous accolades. She was the first black model to appear on the cover of Time magazine, French and Russian Vogue as well as the first British black model to appear on the cover of British Vogue. In 2017, Campbell was named contributing editor of British Vogue by editor-in-chief, Edward Enninful. In 2018, Naomi received the honor of two Fashion Icon Awards – one presented by GQ and the other by the Council of Fashion Designers of America (CFDA).

Beyond her work in the fashion industry, Naomi has appeared in cameos in countless TV shows, music videos and films, including The Cosby Show, The Fresh Prince of Bel-Air, Madonna’s Erotica, Bob Marley's Is This Love, George Michael's Freedom. She has also been seen as a recurring guest star on both Fox’s breakout hit drama Empire and FX’s American Horror Story: Hotel.

Human Rights and Global Health, as they specifically pertain to women and children, have been critical sectors of Naomi’s work. In partnership with the United Nations, she has supported  the International Women’s Day’s Peace March, which aims to end violence against women. As an advocate for HIV/AIDS research, Naomi has worked with UNAIDS where she conceptualized a collaboration with designer Marc Jacobs to design a limited-edition T-shirt to raise funds for the charity’s activities in support of people around the world affected by HIV.

Environmentalism is also close to Naomi’s heart, and she has been a founding supporter of KnotOnMyPlanet, a campaign raising funds for the conservation and rehabilitation of African Elephants. In just three years, the organization has raised over $7 million. In order to spread her philanthropic efforts, Naomi founded her own non-profit Fashion For Relief. Since its inception in 2005, the organization has presented charity fashion shows in New York, London, Cannes, Moscow, Mumbai and Dar es Salaam, raising millions of dollars for various global causes.