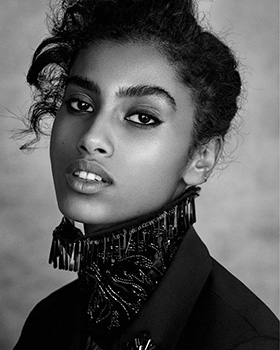 Imaan Hammam’s fierce ascent into the top tier category of fashion model has without doubt projected her to become one of the industry’s most recognizable supermodels.

Of Moroccan and Egyptian descent, she made her fashion debut in 2013 when she walked for Jean Paul Gaultier, Givenchy, Hermès, Proenza Schouler, Chanel and Valentino. Since then, Imaan has become the choice subject for renowned fashion photographers Steven Meisel, Craig McDean, Annie Leibovitz, David Sims, Mert Alas and Marcus Piggott and Inez & Vinoodh.

Imaan held the most international Vogue covers of any model in 2017. Her ever-growing cover resume includes the Arabic, British, Chinese, Spanish, Japanese, Dutch and coveted September issue of American Vogue, along with Allure, Teen Vogue and Porter Magazine.

She currently resides in Brooklyn, New York and is represented by DNA Model Management.