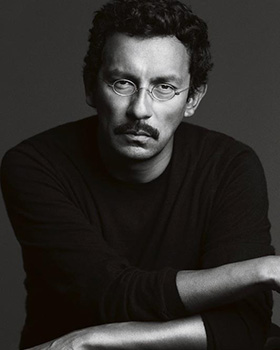 Born in Santa Fe de Bogotá, Colombia, Haider Ackermann grew up in different countries throughout Africa and Europe, including Ethiopia, Chad, Algeria, The Netherlands, Belgium and France. In March 2003, he showed his acclaimed first collection in Paris, and in 2005 he signed with the belgian Group 32. In June 2013, he showed his first men's collection for Spring-Summer 2014.

Influenced by cultural differences, Haider Ackermann is recognized to be a true colorist and to have an energetically stylized eye. His clothes, lying somewhere between dreams and reality, convey a refined contrast of strength and sensuality, with an aim is to empower women and men.