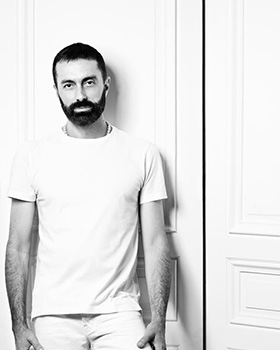 Roman-born Giambattista Valli launched his eponymous brand in 2005, heralding his first ready-to-wear show in Paris, where he had moved from Italy to realize his everlasting dream of creating a true “maison,” after experiences at Roberto Capucci, Fendi and as Creative Director of Emanuel Ungaro.

The maison’s headquarters were established in a historic building located on Rue Boissy d'Anglas. The building also houses the label's main store, entirely dedicated to ready-to-wear collections, leather goods and accessories including shoes, bags and jewelry.

In July 2011 Giambattista Valli showed his first couture collection and was accepted as an Official Member of the Chambre Syndicale de la Haute Couture.

The launch of Giamba – a new, younger sister ready-to-wear line – followed in 2014. From 2008 to 2017 Giambattista Valli was Creative Director of Moncler Gamme Rouge, building a new language of refined activewear for the brand and expanding the horizons for the use of women’s puffer jackets.

Giambattista Valli, a leading and established name in the worldwide fashion scene, brought a new approach and meaning to luxury and beauty, attracting a universe of young, modern and highly glamorous and sophisticated women from around the globe. He has been praised by celebrities and fashion lovers, earning a Star Honoree Award from Fashion Group International in 2011 in New York and Best Designer of the Year Award from Elle China in 2013 and from Marie Claire Spain in 2015.

Amal Clooney, Rihanna, Queen Rania of Jordan, Ariana Grande, Kendall Jenner and Gwyneth Paltrow are among those who are wearing his creations.

Giambattista Valli's narrative is a love story, shared with dreamers and lovers with a common philosophy: ageless, timeless, effortless.