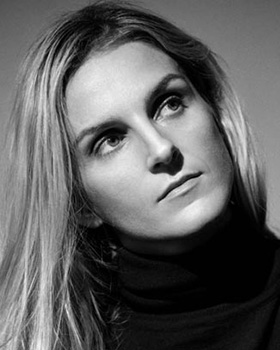 Gaia Repossi was born in 1986 in Turin, Italy. Surrounded by her father’s experience and passion for creating artistic jewelry pieces, she developed an unconditional love for drawing and painting. She studied painting at the Beaux Arts of Paris, and obtained a MasterÊ¼s degree in archeology. During her studies, Gaia gradually entered the world of Repossi. In 2007, at the age of 21, Gaia was appointed creative and artistic director of the house.

Her references come from her passion for contemporary art and the effects of metal within modern sculpture and architecture. She takes inspiration from the works of Alexander Calder, Cy Twombly, Franz West and Le Corbusier, and from the Brutalist, Minimalist and Bauhaus movements. Blending and pushing the boundaries between architecture and traditional high jewelry techniques, GaiaÊ¼s designs are characterized by modern, minimalist motifs and the innovative use of complex patterns.

In 2010, she launched the BerbeÌre Collection, which would become a groundbreaking hit for the house of Repossi, establishing it as an influential presence within the fashion industry and the high jewelry world. She launched her successful Antifer line in 2014.

Gaia also collaborated with well-known photographers such as David Sims, Juergen Teller and the artist Vivian Sassen to develop the image of her collections.