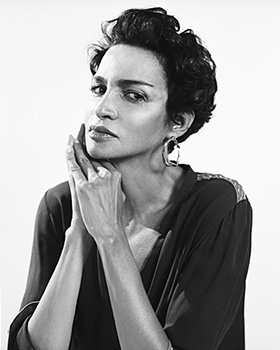 Model, actress, muse and documentary filmmaker Farida Khelfa was born in France to Algerian parents. As a model, she graced the podiums of the most talented designers of the 1980s – Jean-Paul Gaultier, Azzedine Alaïa, Thierry Mugler — incarnating a spirit and a look that hinted at rebelliousness while representing the diversity that was highly sought after during that era.

Inspired by her experiences in fashion, Farida started acting in films in the mid-1980s. In 1995, she joined Azzedine Alaïa’s design studio, and in 2002, she became the head of Jean Paul Gaultier’s Haute Couture salons. Two years later, she returned to the world of cinema, where she switched from actress to film direction in 2010. Her first documentary showcased the success story of Jean Paul Gaultier. Others followed, featuring subjects as divergent as the artistic youth of Tunisia after the revolution, the French presidential campaign of 2012 and the passion of shoe designer Christian Louboutin in 2014.

Fashion remains one of the main pillars in Farida’s life. She spent five years as the House of Schiaparelli’s ambassador, evoking the spirit of a multifaceted woman as embodied by the founder of this storied haute couture label.