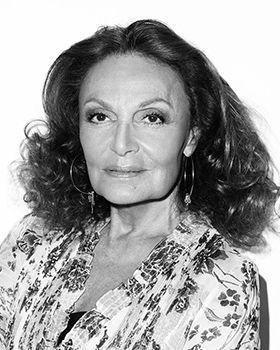 Diane von Furstenberg is a fashion designer, philanthropist and Founder and Chairman of the global fashion company that bears her name. In 1974, she created the iconic wrap dress, which became a symbol of power and independence for women all over the world.

Von Furstenberg’s commitment to empowering women is expressed not only through fashion, but also philanthropy and mentorship. In 2005, von Furstenberg received the Lifetime Achievement Award from the CFDA. One year later, she became CFDA’s President and, in 2015, was named Chairwoman.

For the past decade, she has served on the board of Vital Voices, an organization that supports female leaders and entrepreneurs around the world.

In 2010, with the Diller von-Furstenberg Family Foundation, she created the DVF Awards to honor and provide grants to extraordinary women who have displayed courage, strength and leadership in their commitment to their causes. In 2015, she was named one of the TIME 100 Most Influential People. In 2018, she received the CFDA Swarovski Award for Positive Change

With her corporate headquarters in New York’s Meatpacking District, von Furstenberg was actively involved in the campaign to save the historic High Line railway and to develop The High Line into what it is today. She also serves on the board of the Shed and the Academy Museum of Motion Pictures in Los Angeles.

Von Furstenberg is married to Barry Diller. She has two children, Alexander and Tatiana, and four grandchildren.