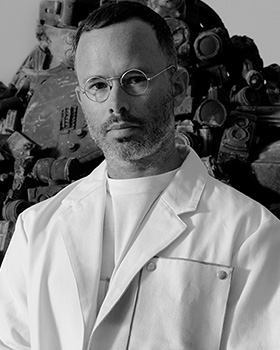 Soon after, he toured worldwide with the Merce Cunningham Dance Company as the company’s stage designer. The experience led to an ongoing collaborative practice, seeing Arsham work with world-renowned artists, musicians, designers and brands.

Daniel’s aesthetics revolve around his concept of fictional archaeology. Working in sculpture, architecture, drawing and film, he creates and crystallizes ambiguous in-between spaces or situations, and further stages what he refers to as future relics of the present. Always iconic, most of the objects that he turns into stone refer to the late 20th century or millennial era, when technological obsolescence unprecedentedly accelerated along with the digital dematerialization of our world. While the present, the future and the past poetically collide in his haunted yet playful visions between romanticism and pop art, Daniel also experiments with the timelessness of certain symbols and gestures across cultures.

In 2008, he co-founded Snarkitecture with architect Alex Mustonen. Snarkitecture is a collaborative design practice established to investigate the boundaries between the disciplines of art and architecture. Snarkitecture focuses on the reinterpretation of everyday materials, structures and programs to new and imaginative effect. The studio's work includes installations, architectural environments and objects for a diverse range of clients such as Beats by Dre, Calvin Klein, COS, Design Miami, Gufram, Kith, New Museum and Valextra.

Daniel’s work has been shown at PS1 in New York, the Museum of Contemporary Art in Miami, the Athens Biennale in Athens, Greece, the New Museum In New York, the Contemporary Arts Center Cincinnati, the SCAD Museum of Art in Savannah and the High Museum of Art in Atlanta. He is represented by Galerie Perrotin in Paris, Hong Kong, New York, Seoul, Shanghai and Tokyo. He also shows with Baro Galeria in Sao Paulo, Ron Mandos in Amsterdam and Nanzuka Gallery in Tokyo.