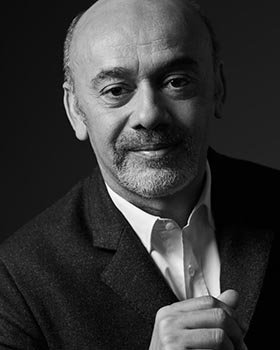 As a 12-year-old child, Christian Louboutin loved to sketch women’s shoes. “I drew stilettos, but I never thought designing them could be a career. I just loved drawing shoes, fascinated by their power of seduction and their ability to shape a silhouette.”

Christian creates shoes, bags and accessories for all genders, as well as a beauty range that includes makeup and fragrances. Worn by musicians and movie stars, royalty and athletes, the designs share a luxurious aesthetic of exoticism, Parisian chic and unique craftsmanship.

Parisian by birth, Christian grew up surrounded by three sisters and has an innate understanding of the female world. In his early teens, he was out clubbing at the iconic Le Palace and watching shows at the Folies Bergères and Moulin Rouge. Fascinated by showgirls, he started his working life as an intern at the Folies Bergères and quickly became obsessed with the role of the shoe in defining a silhouette. “The shoe can change the way a woman walks, the way she moves, it can elongate the leg. The shoe can create magic, illusion, desire, and these are all things that I love.”

Christian approached Hélène de Mortemart, Christian Dior’s fashion director, to present his drawings to her. They met, and she suggested an internship at Charles Jourdan, Dior’s shoe manufacturer, where he spent a very instructive time learning his trade. Then he became a personal assistant to the illustrious shoe designer Roger Vivier, who was a sculptor by training, and showed him the magical symbiosis of exceptional design and craftsmanship.

His collaboration with Roger Vivier done, Christian decided he could no longer sketch shoes for anyone else. He had a brief stint as a landscape designer when a lucky encounter led him to rent a boutique at the corner of Galerie Vérot Dodat, a beautiful neoclassical arcade in the first arrondissement of Paris.

He took a chance on destiny, and opened his first boutique and the House of Christian Louboutin simultaneously at the end of 1991. His first design was a pair of black loafers bearing the word LOVE, inspired by the image of Princess Diana alone at the Taj Mahal and intended for its wearer to look down and be uplifted by a message of love. Within two months, another princess, Caroline de Monaco, became his client and one of his loyal supporters.

In 1992, Christian was working at his desk, contemplating an unsatisfactory prototype of a shoe while his assistant polished her nails. He grabbed her bottle of nail colour and painted the whole sole a vivid and lacquered red. The Christian Louboutin signature red sole was born.

Christian Louboutin is now an independent luxury house, allowing the designer to remain spontaneous, instinctive and free to create. Everything evolves through chance encounters, “le bon feeling” and his travels, all of which have given rise to exciting collaborations. Christian has worked with craftspeople in Bhutan, Senegal and Mexico, with artists such as Dita von Teese, photographer David Lynch and singer Mika, which led to his very first men’s collection in 2009. He loves to collaborate with fashion designers, creating custom shoes for their shows, most memorably for Jean Paul Gautier, Chanel and Yves Saint Laurent’s final couture show in 2002. More recently Christian has worked with Halpern and created sustainable designs for Germanier.

An insatiable traveller, Christian frequents his houses in Paris, La Vendée, Portugal, Brazil and Egypt, where he also keeps a dahabiya, a traditional sailing boat. All his travels feed his imagination and inspire his creativity. “Wherever I go there’s always a garden to see, a museum, a church, a market, a concert, a piece of architecture – even in places that seem devoid of interest. I try to look where others don’t. Joy, awareness and surprise – to me that’s the perfect combination for creating.”