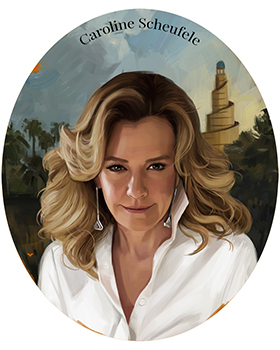 Chopard Co-President and Artistic Director Caroline Scheufele’s energy and passion for design are notably illustrated by the brand’s Happy Diamonds watch collection, which featured the world’s first combination of steel and diamonds, as well as the dazzling Haute Joaillerie Red Carpet and Animal World collections. She has also contributed to Chopard’s international exposure by connecting its image with the world of cinema and iconic events such as the Cannes Film Festival, of which Chopard has been the official partner since 1998.

Caroline Scheufele’s dynamism and insatiable creativity are matched by a devotion to philanthropy expressed by support for charitable causes such as the American Foundation for AIDS Research (amFAR) and the José Carreras Foundation against Leukemia. She has also promoted corporate social responsibility, including Chopard’s membership of the Responsible Jewellery Council since 2010.

In September 2014, she was honoured at the Fashion 4 Development (F4D) annual First Ladies Luncheon for her role in the 2013 launch of Chopard’s Journey to Sustainable Luxury program that aims to place ethics at the heart of aesthetics by sourcing from businesses that are demonstrably committed to responsible ethical, social and environmental practices. Two months later, in November 2014, she was also named Environmentalist of the Year in the BRAVO Business Awards.