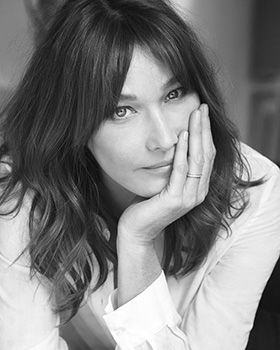 Carla Bruni-Tedeschi was born in Turin, Italy, on 23 December 1967. She is the daughter of concert pianist Marisa Borini and of industrialist and opera composer Alberto Bruni-Tedeschi.

Carla grew up and went to school in Paris. After her high school graduation, she studied art and architecture. She left school at 19 to become a model.

As a model she worked with the most prestigious designers (Chanel, Dior, Yves Saint Laurent, Versace, Armani, Ferre, Valentino, Givenchy, Christian Lacroix, Jen-Paul Gaultier and more), both for runway shows and advertising campaigns. She graced the covers of magazines worldwide such as Vogue, Elle and Marie-Claire, worked with the most renowned photographers (Helmut Newton, Irving Penn, Steven Meisel, Peter Lindbergh, Michel Comte etc.), and became part of the exclusive group called the ”Supermodels” in the 1990s.

She retired from modelling in 1997 to dedicate herself to her music career.

In December 2008, Carla was named global ambassador for the protection of mothers and children against AIDS by UNAIDS, UNICEF and The Global Fund against HIV tuberculosis  and malaria.

In April 2009, the Carla Bruni-Sarkozy Foundation was established under the Foundation de France’s aegis, and started operating in September that year.