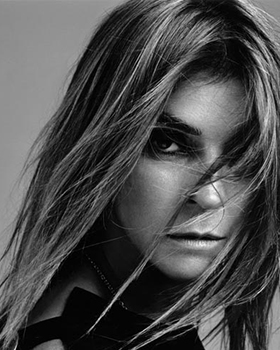 Celebrated as one of the most influential figures in fashion, and recipient of the 2019 CFDA Founder’s Award, Carine Roitfeld has transcended the boundaries of culture and style over the past three decades to build an ever-expanding global brand.

In 2011, after 10 seminal years as the editor-in-chief of Vogue Paris, Carine redirected her energy to personal projects, including the celebrated launches of her biannual style publications CR Fashion Book and CR Mens, as well as uniting with her son and business partner, Vladimir Restoin-Roitfeld in 2016 to launch CR STUDIO, the creative talent agency behind CR Fashion Book with end-to-end production. CR Studio’s clients include Chanel, Van Cleef & Arpels, LVMH, Giuseppe Zanotti, Veuve Clicquot, Yeezy, Hearst Magazines and amfAR, among many others.

In 2019, Carine was the recipient of the CFDA Founder’s Award and also launched her own signature line of fragrances, called 7 LOVERS. The collection is inspired by seven lovers in seven of the fashion visionary’s most beloved cities around the world. Also in 2019, Carine and Vladimir orchestrated in Florence, Italy, the debut of CR RUNWAY, an annual global fashion show and moment uniting the industry’s most celebrated designers and models from around the world.