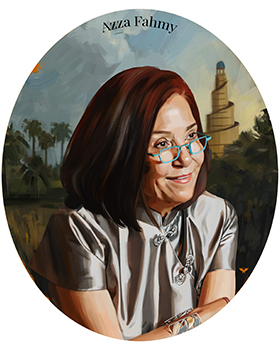 Chairwoman & Creative Director at Azza Fahmy Jewellery.
Over 50 years ago Azza Fahmy initiated her journey towards being one of the most esteemed jewellery designers in the MEA region. With a profound purpose, Azza Fahmy has taken the role of translating the region’s culture and international art and historic references to the world, through contemporary jewellery design that reflects her unique research approach and craftsmanship preservation.

The company is recognized for establishing Egypt’s luxury market and employs over 250 people. The brand’s retail operation comprises of 19 retail doors across the MEA including owned and operated boutiques with most recent additions of their first London store in Burlington Arcade, THAT concept store in Dubai, plus retail clients in the US, London, online and their own online boutique azzafahmy.com.
The history of the brand began when Azza Fahmy (a BA graduate in Interior Design,) discovered a German art book about the classical jewellery of Medieval Europe at an Egyptian book fair igniting her passion for jewellery design. While continuing her day job, she became an apprentice in Khan El Khalili, Egypt’s ancient jewellery quarter where she spent her evenings learning with one of the craft’s most respected masters – the first woman to achieve this. This was followed in the mid-1970s by a scholarship from the British Council where she completed her jewellery craft education at the City of London Polytechnic.

Azza Fahmy’s handcrafted jewellery is created with locally sourced 18ct Gold, Sterling Silver and their trade-mark unique metal mix combination of 18ct Gold and Sterling Silver, with stones are from India.
Celebrated as Egypt’s first luxury multi-national brand, Azza’s craft has captured the attention of cultural and fashion cognoscenti and has seen her

collaborate with designers such as Julien Macdonald, Preen by Thornton Bregrazzi, Matthew Williamson, the British Museum – all of whom she has created collections. She has recently transferred her talents to architectural design with solar technology company KarmSolar. In 2013, she independently funded and established the successful ‘Design Studio by Azza Fahmy’ (DSAF), the first design education hub of its kind in the region. She then founded The Azza Fahmy Foundation, a not-for-profit organisation that qualifies young people in the jewellery making industry. A tailored technical, theoretical and on-the-job training programme is implemented to create highly-qualified technicians in all aspects of the jewellery-making value chain.

Listed as one of Egypt’s most influential women, Azza Fahmy travels internationally as a cultural ambassador for her country, and her dedication to her craft and exquisitely designed jewellery has won her international recognition that boasts a diverse client list attracting jewellery connoisseurs from around the world including royalty and stage and screen. Azza works in partnership with her daughters Fatma Ghaly, CEO and Amina Ghali, Head of Design.