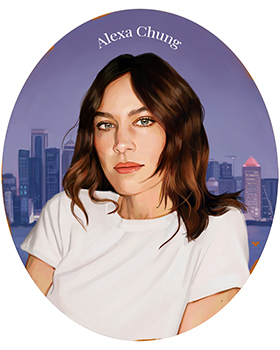 Alexa Chung is amongst the most recognized style icons of her generation with an unprecedented list of credits, including a Contributing Editorship at British Vogue, recipient of the Fashion Icon prize at The Fashion Awards a record breaking three times and co-host of the Netflix series Next in Fashion.

With nearly a decade’s experience in designing for leading international brands, Alexa launched her namesake brand, ALEXACHUNG, in London in 2016 where she holds the role of Creative Director. Winner of the Harper’s Bazaar Breakthrough Designer Award in 2019, ALEXACHUNG prides itself on a unique approach to making clothes, combining Parisian chic with a New York edge, as well as a very British sense of humor.

In front of the lens, Alexa has worked with the industry’s leading creative talent including Peter Lindberg, Alistair McLellan, Glen Luchford, Patrick DeMarchelier and with four British Vogue covers to her name, Alexa continues to be the ultimate British muse.