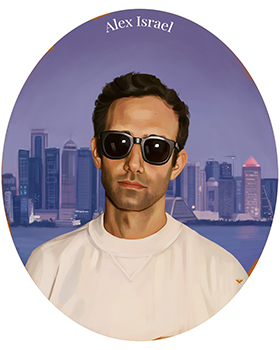 ALEX ISRAEL (b. 1982, Los Angeles, CA) lives and works in Los Angeles. Deeply entwined with his hometown, his work explores popular media, Hollywood, and the cult of celebrity, while positing LA as central to an understanding of American culture and the American dream. Israel’s practice has included high-profile collaborations with Bret Easton Ellis, Louis Vuitton, Rimowa and Snapchat, as well as his own Freeway Eyewear and Infrathin Apparel designs. His ongoing web series, an LA-centric talk show hosted by the artist and titled “As It Lays,” is streaming on YouTube, and his feature length art film, “SPF-18”, is now streaming on Netflix, following a tour to high schools across the United States.