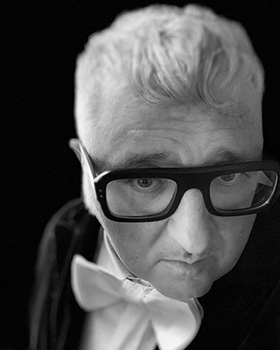 In October 2019, Alber Elbaz and Richemont signed a joint venture agreement, AZfashion. AZfashion will be an innovative and dynamic startup to turn dreams into reality, focusing on developing solutions for women of our times.

From October 2001 to October 2015, Alber Elbaz was the artistic director of Lanvin, with a mission to "wake up the sleeping beauty." During his 14-year tenure, he transformed Lanvin, the oldest French couture house still operating today, into one of the most sought-after luxury labels in the world.

Alber Elbaz was born in Casablanca, Morocco and raised in Israel, where he graduated from Shenkar College, the Tel Aviv School of Fashion and Textiles. He then trained in New York, where for seven years (from 1989 to 1996) he was the right hand of legendary American couturier Geoffrey Beene. In September 1996, he moved to Paris to take over as the head designer for prêt-à-porter for Guy Laroche and stayed until 1998. He successfully produced collections there from fall-winter 1997 to spring-summer 1999.

In November 1998, he took over as artistic director of Yves Saint Laurent Rive Gauche, until 2000. His fall-winter 1999, spring-summer 2000 and fall-winter 2000 collections perpetuated a style and successfully married the past and the future.

Open, sincere, intuitive and sparkling, he has a taste for the unforeseen and rises to challenges. At Lanvin, he brought to life an urban elegance where emotion and optimism kindle desire. He reconciled modernity and femininity, technique and originality, sensuality and creativity.