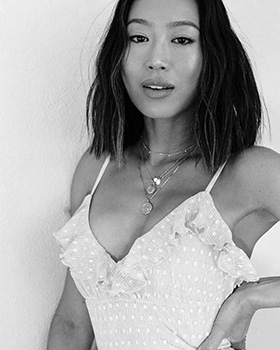 Aimee Song is an LA-based interior architect by trade and also runs one of the largest fashion and lifestyle sites in the world, Song of Style. Her content ranges from what she wears and where she travels, to design inspiration and personal topics. She has worked with countless companies, including Dior, Ralph Lauren, Tiffany & Co., SKII, Giorgio Armani and Volvo, and she was the first digital ambassador for global beauty brand Laura Mercier. Aimee has been named one of Forbes 30 Under 30 and has been included in the Business of FashionÊ¼s prestigious BoF 500, a professional index of influencers who shape the global fashion industry, for two years straight.

In 2016, she released her first book Capture Your Style, now a New York Times bestseller, and followed that success with World of Style in October 2018. She added toy designer to her resume when she collaborated with Mattel on her very own, one-of-a-kind Barbie doll and has focused increasingly on sharing her philanthropic work, including mental health awareness, with her audience. Most recently, she launched the long awaited apparel brand, Song of Style Collection, to immense success.