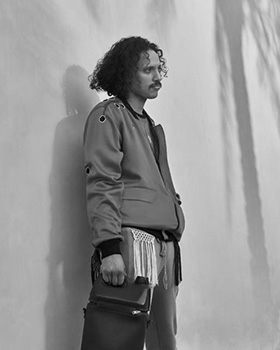 Moroccan bag designer and artisan Zakaria Bendriouich was born and raised in Marrakesh. A former student at Casablanca’s Collège LaSalle, he spent most of his teenage years with the craftsmen of Marrakesh’s Medina, where he acquired his skills and inspiration. In 2012, Zakaria had a major accident that resulted in him losing a kidney. This was a major turning point in his life. The loss of his kidney required him to drink three liters of water per day, so he had to carry water bottles at all times, and his friends joked about him needing to carry a jerrycan. This led him to create the Bidou Bags, which were conceived in order for Zakaria to hold his water bottles in a stylish manner. The designer produced his handmade leather bag using recycled plastic jerrycans (in a satiric take on his health condition). Fans of the Bidou Bags include supermodel Naomi Campbell.