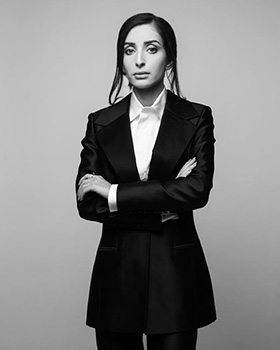 Yasmin Mansour was born in 1990 and earned her fashion degree in 2012. Inherent in her designs is a message to empower women, to give them freedom to be what they want to be. Yasmin is also influenced by her father’s strength and work ethic – seeing her father thrive and build from nothing encouraged her.

The Yasmin Mansour brand was founded in 2014. It's one of the first luxury womenswear labels based in Qatar and one that is inspired by Arab culture and traditional women’s clothing. The first collection, Sierra, included embroidered capes reminiscent of an undulating landscape and replete with geometric and structural details. One of the main ideas behind the Yasmin Mansour brand is to create unique, one-of-a-kind pieces.

Other achievements for the brand include a collaboration with Nespresso and a sunglasses collection created with Dutch designer Leo Vanweersch.