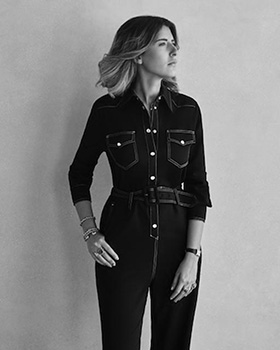 Oumaima Tamarzizt was born and raised in Tunis. Driven by a passion for creation and beauty, she first studied design before specializing in jewelry. She worked in Paris as a freelance designer for prestigious brands and then launched her own brand, Tamarzizt, in 2014. Her fine and original creations are inspired, among other things, by a rich heritage and a thirst for travel and freedom that nurture a very fertile imagination. The roots of the designer and her influences collide in a mix of colors and shapes: her collections sometimes evoke the traditions of the East, sometimes the modernity of the West, like colored latticework alongside sleek skyscrapers. Oumaima lives and works between Paris and Tunisia. Her creations are manufactured in small ateliers in both cities.