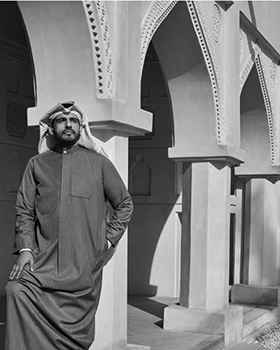 Anas Alomaim, the talent behind the OÅªMÄEM brand, is an architect, artist, jewelry designer and professor of architecture. He developed a passion for jewelry design during a critical moment in his career. After the death of his father, Anas stepped into a new phase of his life: he awakened anew to the relationships that connect him to the women in his family. He designed rings for his mother and sisters as a gesture of gratitude for their support during those difficult times. It was then that he realized his passion for jewelry design and its multifaceted beauty.

After finishing his Master’s in Architecture from Columbia University, Anas moved to California to pursue his PhD at the University of California, Los Angeles. He worked on analyzing the geometries of structures that respect the larger laws of nature, constellations and planets. He participated in and co-curated several exhibitions in Dubai, New York, Los Angeles and his native Kuwait. He also worked for academic institutions, corporate design firms, independent architectural offices, and he interned with fashion designers, including Diane von Furstenberg.