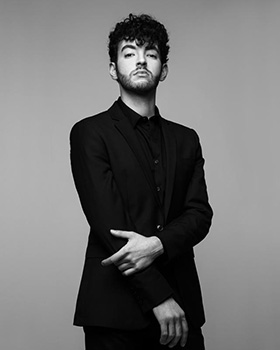 The goal of fashion should be to tell a story and to transform pieces of fabric into magic that transcends all boundaries – and that’s what characterizes Karim Adduchi’s designs. He is an Arab illustrator and fashion designer who grew up in the mountains in Imzouren, Morocco and moved to Spain at a young age with his family in the hopes of a more prosperous future.

When he arrived in Barcelona, he was mute for two years because he was a child lost in translation and confusion. He immersed himself into art and browsing fashion magazines and that helped him find his voice. He started speaking and communicating again due to the healing process of art and fashion. After completing his art studies at the University of Barcelona, he moved to Amsterdam to further his education.

Once again, he found himself far away from his family, his hometown and his culture, and he felt an urgent need to express his thoughts through fashion. Unable to speak English or Dutch, he had to escape the silence and communicate with fashion and drawings. His Moroccan and Arab backgrounds gave him the advantage of approaching fashion in a uniquely personal way. He decided to showcase his own story and his heritage in a transparent way – showing who he was instead of who he wanted to be – and the design process was cathartic.

What followed was beyond his wildest imagination – he showed his first collection to much acclaim. His story became an example of self-expression and globalization. A year later he was asked to open Amsterdam Fashion Week and the audience related to his message. The dream of a Moroccan child from a small village was coming to life. People saw themselves not just in the clothing but also in Karim’s story.

Following the success of that show, he decided to have another show in tribute to the Syrian refugees and to give some of them the same opportunity to express themselves using fashion. That same year Forbes Europe and Forbes Middle East included him in their 30 Under 30 lists as one of the most influential designers to watch, and he was honoured with the Amsterdam Culture Business Award. People were speaking of the impact of a Moroccan designer in Europe, showcasing the bridges between Arab and Western cultures and of how his fashion brought a new approach that had never been seen before.

That success trickled into him being asked to join the official program of Paris Fashion Week for Fall-Winter 2019-2020 with his first ever ready-to-wear collection. The collection, aptly titled Maktub, tells the story of destiny using Moroccan fabrics, embroideries, prints and designs. The story behind Karim and behind his designs is not just his anymore – it belongs to everyone searching for a way of drowning out the silence of languages and cultures that do not understand them. This is the direction in which we’re headed as a society. This is that moment.