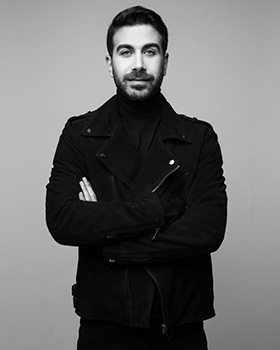 Beirut-born Hussein Bazaza developed an appreciation for all artistic fields at a young age, eventually enrolling at ESMOD Beirut to study fashion. Upon graduation in 2011, Bazaza started with an internship at Maison Rabih Kayrouz in Paris, and later worked for Elie Saab as a junior designer, before launching his first ready-to-wear collection in 2012, which was selected by the Starch Foundation. At age 23 Hussein opened his first showroom and atelier in Beirut.

Hussein was named Best Upcoming Middle East Designer by the ELLE Style Awards in 2013. In 2015, he was named Best Emerging Designer at The Middle East Fashion Awards, and he was also selected as one of the winners of Who Is On Next? in Dubai by Vogue Italia. The following year, he was the inaugural winner of the Style.com/Arabia – DDFC Fashion Prize, with the launch of his capsule collection on Farfetch.com in spring 2016.