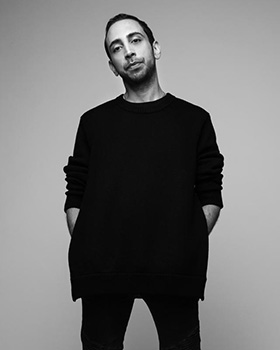 Amine Jreissati grew up in a Lebanese family with an acute affinity toward fashion. After a Bachelor's in business hospitality from the Lebanese American University (LAU) in Beirut, he went on to obtain a Master’s degree in fashion design from Istituto Marangoni. Since then, he has been living, breathing and working the fashion industry.

Amine kicked off his career with a five-year stint as head of the fashion department at Marie Claire Arabia, after which he became a freelance art director for luxury brands such as Chanel, Dior, Prada and Bulgari, and as a stylist for select regional and global celebrities.

Having worked closely with an array of talented photographers, as well as with reputable regional online and print publications, Amine has produced high-caliber visual shoots and acclaimed editorial content, thus building strong relationships with the local and international press.

In October of 2017, he launched his own label, Boyfriend, which consists of capsule-like collections that are minimal, subliminal and gender invisible. He created a special capsule in collaboration with regional influencer and style icon Dana Hourani. His brand has gained a following among the fashion-savvy Beirut and Dubai crowds, garnering such high-profile fans such as Queen Rania of Jordan.