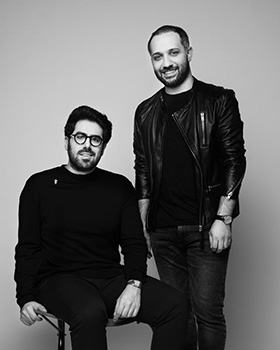 Azzi & Osta, the brainchild of designers George Azzi and Assaad Osta, is a couture house that began to take shape when the duo joined Esmod Beirut in 2004. They graduated top of their class, with Azzi awarded the Prize of the President of the Jury (Elie Saab) and Osta awarded the Prize of the July. Afterward they worked at Elie Saab for 18 months. With their common interest in mid-century inspirations and vintage art, they decided to launch their couture house together in 2010.

Their expert manipulation of fabrics gave rise to structured, swirly volumes and contoured silhouettes. Their vintage style has a contemporary twist, which, combined with the delicate embellishments and embroideries, resulted in impactful creations for the modern sophisticated and glamorous woman who also appreciates tradition. Their creations of unique, elegant and eclectic couture tailored for the modern woman have caught the eye of a number of international celebrities such as Beyoncé, Cardi B and Kendall Jenner.