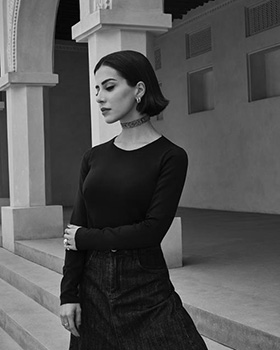 Alexandra Hakim is a British-Lebanese jewelry maker and designer whose innovative craftsmanship, thought-provoking designs and dedication to sustainability have gained her an international cult following. She completed an art foundation at London’s Central Saint Martins before earning her BFA in jewelry and metalsmithing at the Rhode Island School of Design, where she specialized in design innovation. She launched her eponymous brand in Beirut, Lebanon, in 2016 making waves on the jewelry scene, infiltrating and gaining the respect of the predominantly male industry of craftsmen and metalsmiths thanks to her technical prowess and unique methods. Each Alexandra Hakim collections centers on found materials and objects, which would otherwise go to waste – often straight from Beirut’s bustling markets themselves – but which in her hands are given a new lease of life and meticulously repurposed into striking, contemporary pieces of jewelry, of which no two pieces are the same.