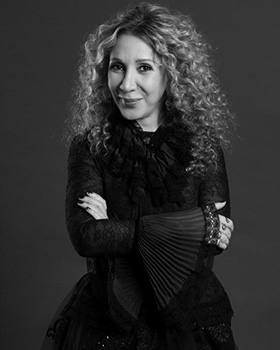 Reem Acra is a renowned international designer known for her breathtaking collections in ready-to-wear and bridal. She combines tradition with a modern aesthetic and leads the way by continuously redefining the boundaries of fashion.

She launched her eponymous line Reem Acra New York in 1997, and, after successfully establishing herself in the bridal market, expanded into ready-to-wear in 2008.

Of Lebanese heritage, Acra graduated from the American University of Beirut with a business degree. She went on to study at the Fashion Institute of Technology (FIT) in New York and the École supérieure des Arts et Techniques de la Mode (ESMOD) in Paris.

Celebrities such as Angelina Jolie, Taylor Swift, Jennifer Lopez, Madonna and Kate Hudson have worn her intricate designs to red carpet events such as the Oscars, Grammys and Golden Globes.

Some of her notable accolades include being named the Seventh Most Powerful Arab Woman in the World by Forbes Magazine, which includes the likes of Amal Clooney, Nemat Shafik and Zaha Hadid. She has also been the recipient of the Building Bridges Award from the Bridges of Understanding foundation, a non-profit organization which seeks to improve relations between the Middle East and the United States.

Acra is a member of the Council of Fashion Designers of America and serves on the Board of the Dubai Design and Fashion Council since its inception. Recently, in a bid to inspire young Arab women and aspiring designers and broaden her reach to this target group, Acra has co-created and starred on the hugely successful Middle Eastern reality TV show, Fashion Star, where she serves as the lead judge and mentor to 12 aspiring up-and-coming designers.