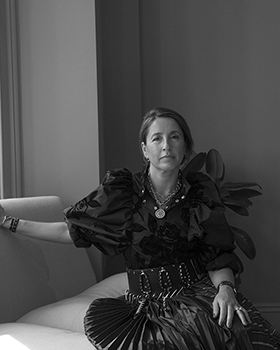 Natalie Kingham has had an incredibly diverse career in fashion. Starting out as a buyer at a well-known London store, she then moved into styling before launching her own label in 2000, which received international press acclaim.

Throughout her career, Natalie has built and developed strong relations with several key London brands, utilizing these contacts when she joined MatchesFashion as international womenswear buyer in 2010. Since then she has been central to growing the business both online and in-store and has been the driving force behind the covetable list of collaborations and exclusive launches, including collections by Altuzarra, Emilia Wickstead, Ganni, Simone Rocha, Erdem and Gabriela Hearst. In 2013 Natalie became fashion and buying director, overseeing all aspects of the womenswear buy for MatchesFashion.