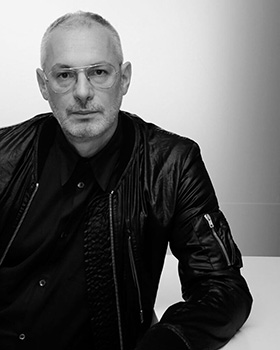 Italian-born Fabio Piras has a BA in fashion design and an MA in womenswear, both from Central Saint Martins. From 1994 to 2000, he helmed his eponymous label, which showed at London Fashion Week. He has also had a successful career in creative direction and consultancy for luxury fashion brands in Europe and Asia.

In 1998, Diego Della Valle offered him to collaborate on creative supervision at Tod's, Hogan and Fay. In 2000, Brioni appointed him creative director of the tailoring house and gave him the mission to initiate Brioni donna. In 2005, he joined knitwear brand Malo as creative director. And in 2007, Fabio took over the creative direction of womenswear brand Giada, which is owned by Chinese group Redstone. Giada established its first flagship store outside China in Milan’s Via Montenapoleone in 2013.

He was appointed course director of Central Saint Martins' MA fashion course in 2014. His vision during his time as course leader was to shape a new era for MA Fashion education. “In the end, fashion education is about developing students’ formative processes in thinking and learning their craft in practice," he says. "As educators, we must encourage students to subvert the status quo and trust their intuitions, experiences and skills."