A Pure Moment of Arab Pride

This Wednesday evening in Doha was only about taking Arab fashion from local to global, thanks to Fashion Trust Arabia.

The emotion was palpable at the grand Qatar National Museum entrance, a monumental rose of the desert designed by architect Jean Nouvel. To measure it, it would be enough to think that six young talents, almost unknown the day before, joined that Wednesday evening everyone the fashion planet counts as celebrities and historical pillars.

One could not imagine a more hopeful spirit around the cradle of young Arab designers that Doha has officially become, thanks to the Fashion Trust Arabia initiative. On the red carpet and under the crackling of camera flashes, was a sense of culmination, like those at fashion weeks and major film festivals. You’d like to believe that, yes, with all these rare ingredients, this FTA awards ceremony was akin to an Oscars ceremony. The feeling was confirmed throughout the evening by the generosity and the quality of the appearances and speeches. Speaking of generosity, the orchestra that hosted the evening was the Afghanistan National Institute of Music, a home for exceptional talent and underprivileged children.

Legendary Scottish milliner Stephen Jones, passing by the reception, let his enthusiasm flow: “It was while visiting the finalists’ exhibition that I became aware of the cultural diversity and the talent pool that is the Arab world. It made me feel confident that fashion has never been futile and that its unifying power is far superior to that of politics. I was impressed by the diversity I saw, especially with the presence of Colombian designers who reinforced my impression of seeing creative energies from all over the world converge in this room. I come out of here with a dream, to learn Arabic calligraphy. “

For her part, journalist, stylist and model Carine Roitfeld told us of her crush on Colombian designers and the reservoir of patience and delicacy that their craftsmanship represents. She too dwelled on the diversity of narratives and aesthetics, originality and the intermingling of cultures discovered at the finalists’ exhibition.

Lebanese-Iranian fashion editor, model and consultant Caroline Issa did not hesitate to tell us about her attraction to the work of Laith Maalouf and Zaid Affas. Lebanese designer Elie Saab said he was impressed by the professional quality of the work presented, “I appreciated the opening [up] of this edition to Colombian designers, it is a sign that many other non-Arab countries will be invited to participate in this event in turn. I see that FTA has found its place and is called upon to anchor itself more and more in the international fashion landscape,” he said.

Outside the venue, star model Naomi Campbell was already taking pictures with French-Somali talent Abdelagader El Tayeb – who was obviously her favorite. Abdelageder’s collection, made of intricate weavings of palm leaves under the brand name El Tayeb Nation, was one of the jury’s coup de Coeurs and won the Franca Sozzani Debut Talent Award. 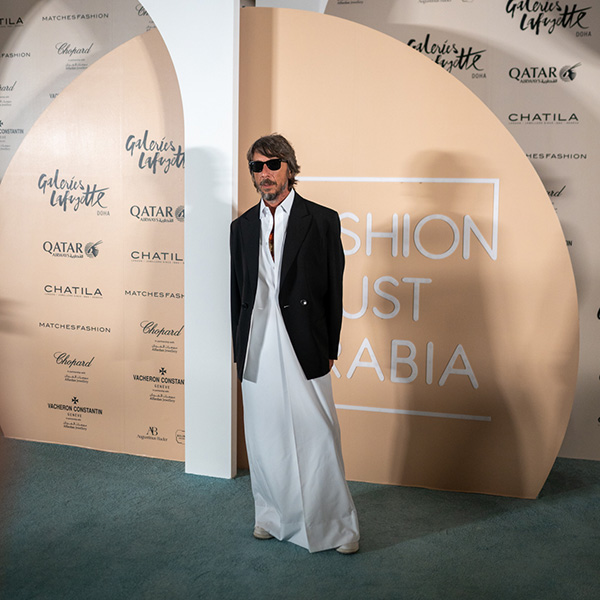 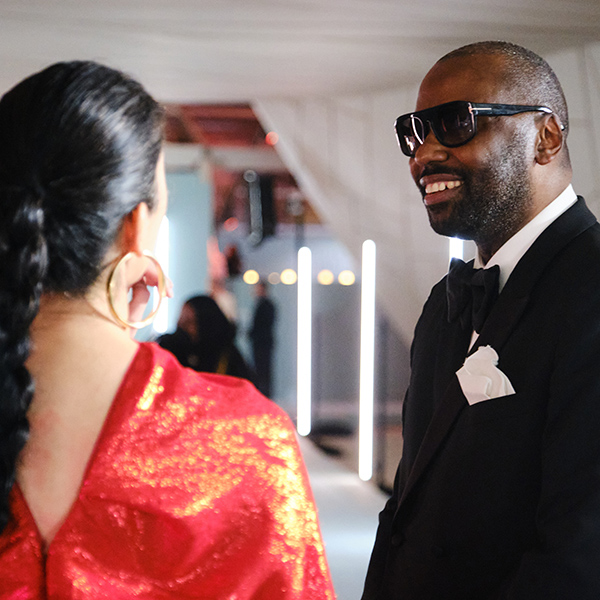 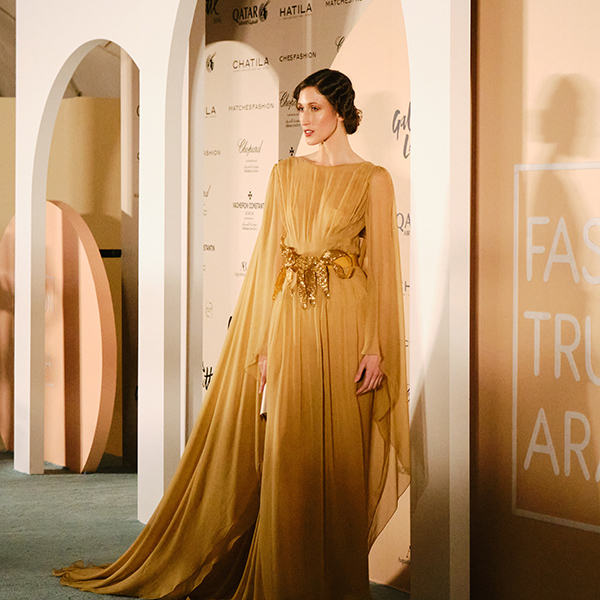 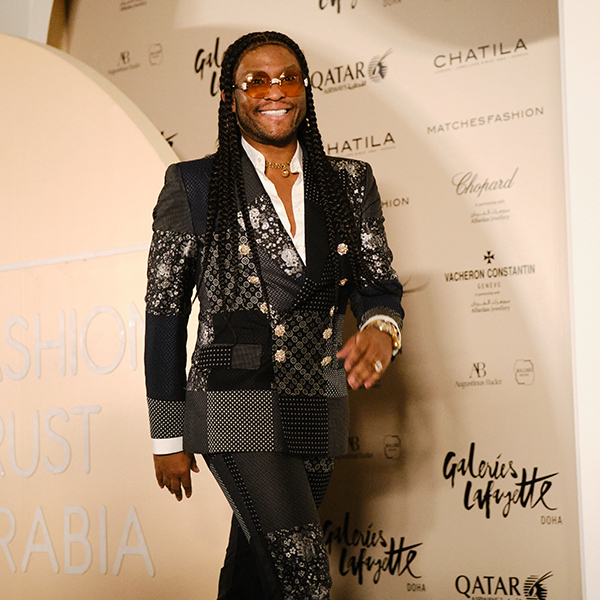 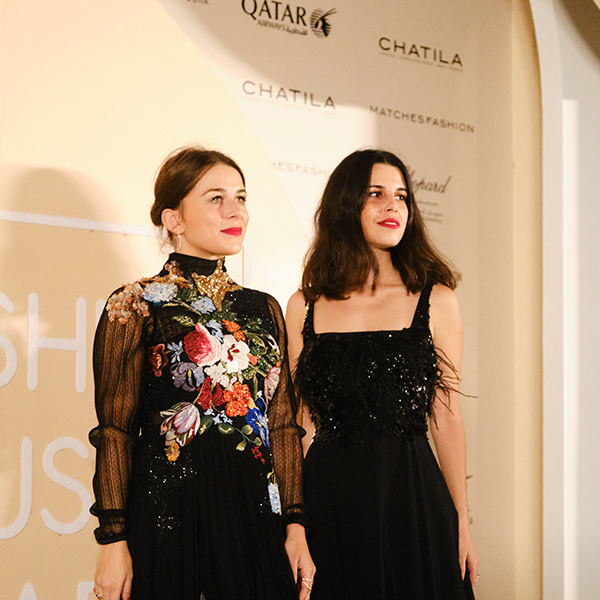 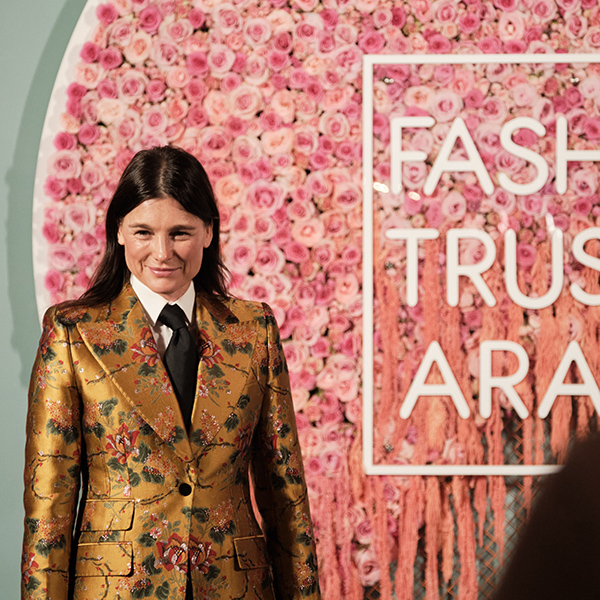 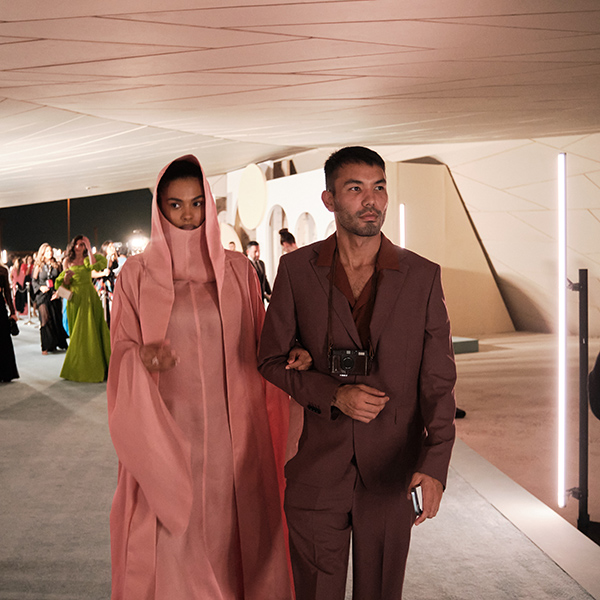 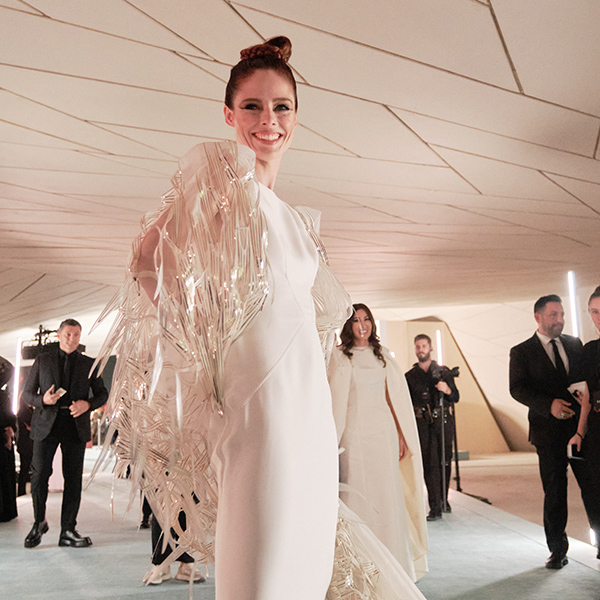 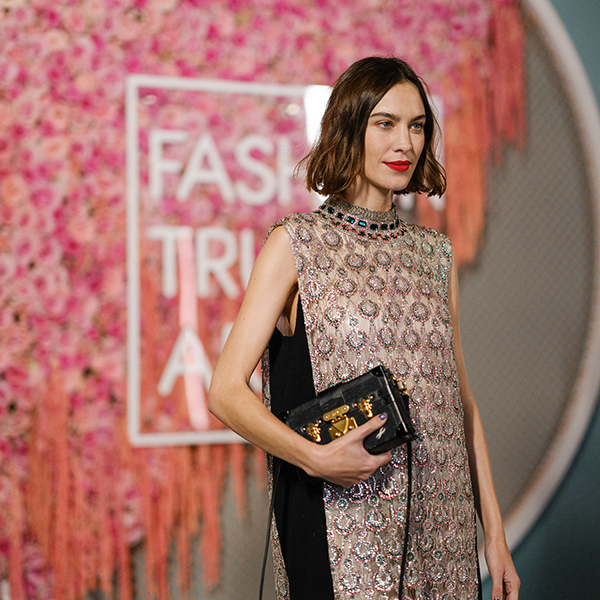 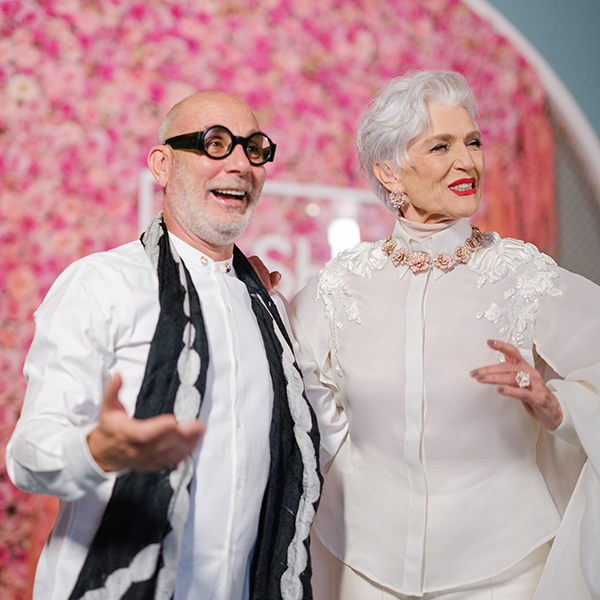 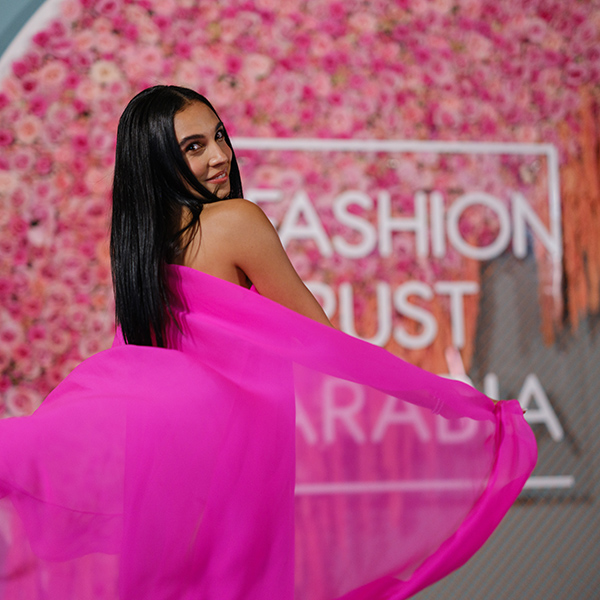 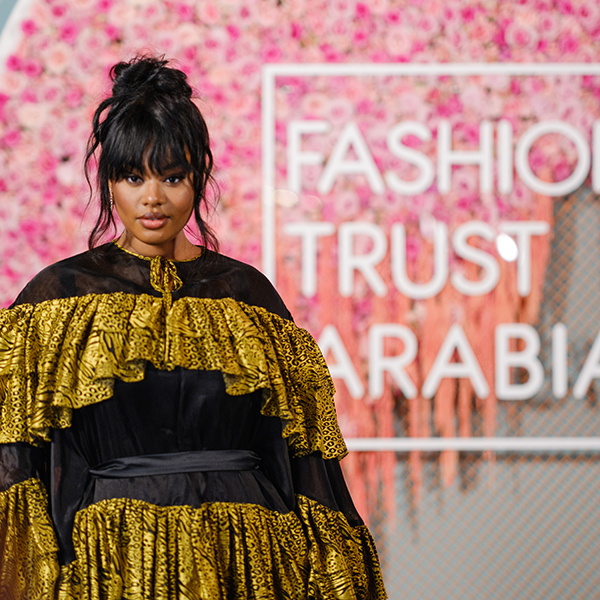 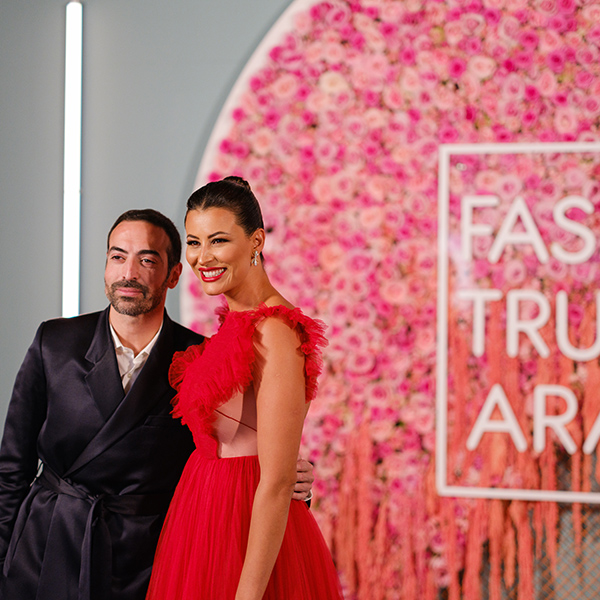 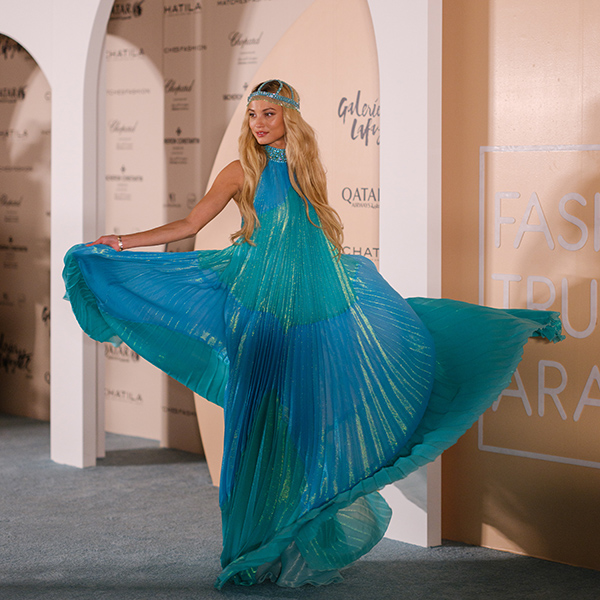 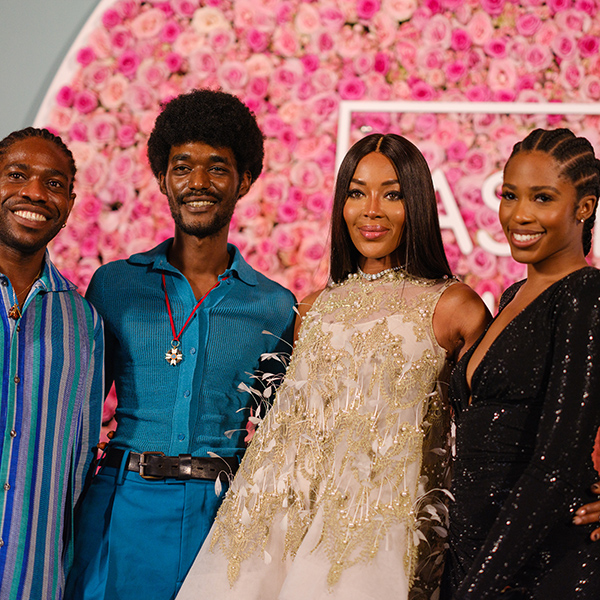 “Proud to be an Arab woman”

Delivering the opening speech, FTA Co-Chair Tania Fares looked sumptuous in a white scuba balloon dress and Ottoman-style vest made of crystals in several shades of red, along with matching accessories designed by Krikor Jabotian. After thanking the Honorary Chair of FTA, H.H. Sheikha Moza bint Nasser, and the Co-Chair H.E. Sheikha Al Mayassa Bint Hamad bin Khalifa Al Thani, whose unwavering commitment has allowed this project to go beyond its wildest dreams, Tania Fares also praised the partners MatchesFashion, Maison Pyramide and Harrod’s Maison de Mode for their roles, particularly in terms of mentoring and marketing. She concluded her speech on an emotional note, declaring : “I am proud to be an Arab woman”.

The winners of the first editions followed one another on the platform, including the shoe designer Andrea Wazen, at the head of her eponymous brand, and the duo Zineb Britel and Laura Pujol of Zyne. Their failures and their successes, their testimonies, in particular that of Andrea Wazen, who saw her world collapse during the double explosion of August 4, 2020 at the port of Beirut, underscored the ideas of perseverance, self-confidence and authenticity.

Words of wisdom were also those of Virgil Abloh. “We come from all over the world, from different backgrounds and patterns, but we have one thing in common: bring beauty to the world. Nights like this one remind me why this industry is important, and why events like this one tonight in Doha is important. Fashion is at its best when diverse and when it tells different stories”, said the American fashion designer.

FTA Co-Chair HE Sheikha Al Mayassa bint Hamad bin Khalifa Al Thani, wearing a stunning abaya adorned with Arabic acalligraphy, designed by Bouthayna Al Muftah X Yasmin Mansour, concluded the evening with a powerful speech, carrying a message of peace and tolerance. Hailing the authenticity of the Colombian designers, who were also encouraged by a recorded message from the wife of the President of Colombia, Ms. María Juliana Ruíz de Duque, Sheikha Al Mayassa pointed out that the fashion sector is growing in the Arab region and invited young talents to “find the voice that will make you stand out from the crowd” but also “to remain true to their origins” and “to delve into their past to find the contemporary”.

Forty-two candidates selected from among 700 applicants, the candidates represent the crème de la crème of creators from the Arab world and Colombia, the country guest of honor at this edition of the Fashion Trust Arabia awards. For comparison, the first edition, in 2019, was based on 200 applications. This makes it possible to measure the distance traveled and the importance of the FTA prize for Arab fashion designers, whose talent was until then limited to attending expensive Western universities and trying to squeeze through the narrow door of major European, British or American fashion houses.

It would be an understatement to say that in just three years of existence, including one paralyzed by the pandemic, the FTA, under the honorary presidency of HH Sheikha Moza bint Nasser al-Missned and the co-presidency of Sheikha Al Mayassa Bint Hamad bin Khalifa Al Thani and Tania Fares, has succeeded in making Doha the essential springboard to the world market for Arab designers. Beyond its consistent financial endowment, the FTA award offers a mentoring program, supported, for the 2021 edition, by the online sales site MatchesFashion. 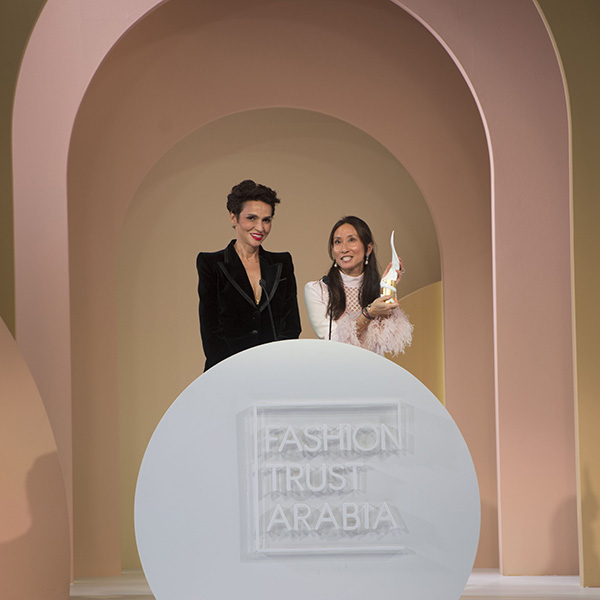 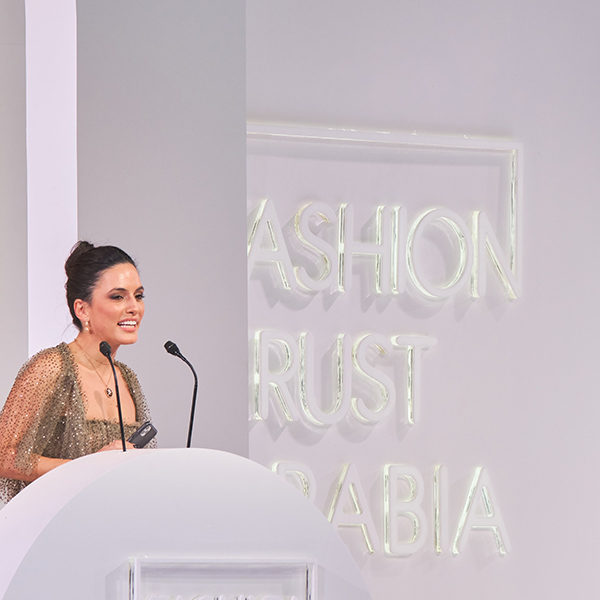 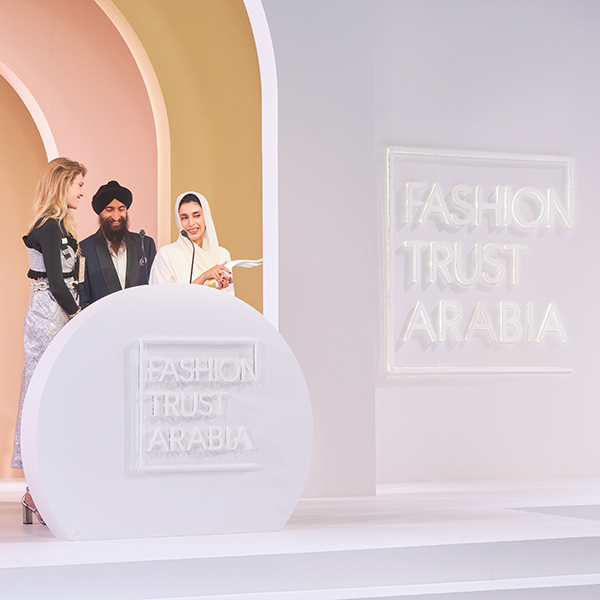 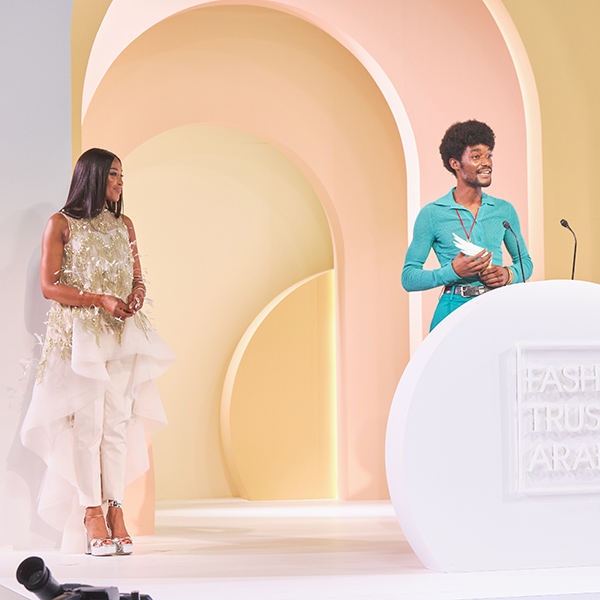 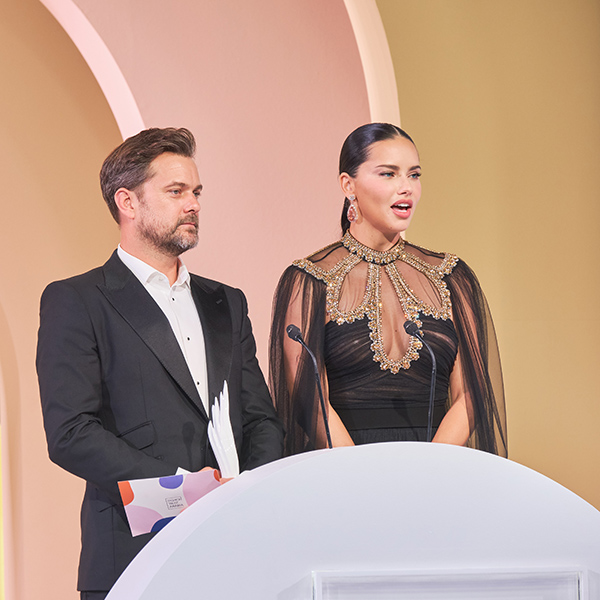 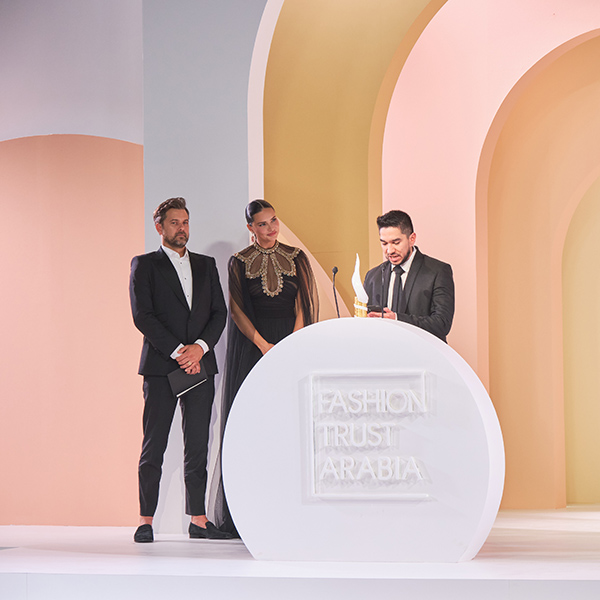 The winners took it all

While emotions ran high, and crowds gathered in a swarm to congratulate the winning designers, Pulse caught up with them right after their win to ask two simple questions: “How do you feel, and what’s next?” This is what they each had to say.

“It’s a blessing and you don’t expect it, sometimes it’s like an arranged marriage and sometimes it’s like a honeymoon, and it’s just one of those nights where it feels like a honeymoon. I’m really happy for my team, and for my partner and wife, who is always supporting me visually on the brand aesthetic. I think without the support I have from my team, my brand would not be at the level it is right now. Obviously the design is very important and the manufacturer is great, but we also need to put together so many pieces, and the Prize will help us to further expand the brand and its operations.”

“I’m very happy and the Prize has already changed my life because now I get to do what I’ve always dreamt of. Since starting my business things have been good, but I’ve always wanted to grow it more and this opportunity will let me do just that.”

“I’m so, so happy. I’ve been trying to tell my parents, but there is no Internet, so I can’t tell anybody I won yet and it’s stressing me out. Now it means that I can move my brand to the next level, which for us is growing our direct-to-consumer business model and working with the right wholesale client and setting our e-commerce, which is really important.

“It was truly an honor to meet Her Highness Sheikha Mozabint Nasser, who was an inspiration from the very beginning, and receiving the Prize on this momentous occasion for the best collection in category Evening Wear. I’m also deeply grateful to Her Excellency Sheikha Al-Mayassa bint Hamad bin Khalifa Al Thani for being part of this incredible platform. Throughout history the Middle East has always been the center of the world, and I am honored to be part of this community and to have found a place that I belong to. I’m proud to be an Arab and to celebrate Arab fashion. Winning this prize means [that I can continue the] drive to keep striving for what I believe in; to create in a sustainable and ethical way, which puts the planet before profit. It would allow me to fulfill a long time dream to design a collection in the MENA region, and continue on my ultimate mission of empowering women, using fashion as a means of self expression.”

“I’m feeling proud to be taking this Prize back my colleague artisans in Colombia and I really think they are the true winners today because of the dedication, patience and love that they put into all their creations. The next step for me would be to put Colombia on the map and to tell all the stories that we have, and to inspire a new generation of artisans and make sure that our craft does not die and disappear into oblivion.”

About the Author: admin